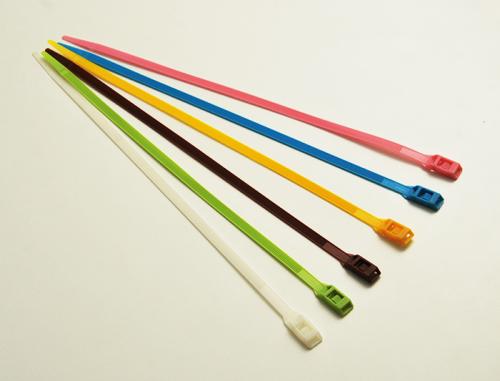 When you get a zip tie in your hand, do you know when zip ties were  invented? I am wondering when this little but great invention was born. If you are scratching your head, searching online for the answer, I think this post may be helpful for you.

When were zip ties invented? They were invented on June 24th of 1958.  At first, zip tie was designed for the application of the airplane. The designer Engineer Maurus C. Logan wanted to invent the new bundling material for the airplane. So he began his experiments. And in 1958, he successfully invented the first zip tie in the world.

The fist piece of zip tie was born. Then it brought the revolution of the bundling industry. Zip tie stated to take place of the traditional ropes and wires. And the self-locking zip tie ignite the trend of designing new types of zip ties. Many different kinds of zip ties were invented after that.

In the year of 1956, Maurus C. Logan found the workers of Boeing Aircraft manufacturing factories spending huge time in operating the waxed nylon ropes. The process was very time-consuming. Besides, the waxed nylon ropes were not convenient to use. Many workers were cut by the ropes in the bundling. So the engineer realized it was necessary to design better solution. He started his exploring and experiments in the lab determinedly then.

He used the metal as the materials at first. Then he found it was not so available to avoid hurting the hands of the workers. And it may be a bit heavy for the airplane. Then he decided to use the nylon materials. This choice was a great step for all the world. After times of failures and disappointing, Maurus finally invented the first zip tie in the whole world.

This invent has got the patent. It successfully solved the bundling problems in the aircraft. And now, zip ties can be found used in almost every place. Zip ties leaves its shadow in either the engines of Nascar automobile race, or the toolshed of our backyards.

And there were more and more various innovation of them in the industry. People found the zip ties is not enough for the bundling. They need them to fasten the articles in the high temperature. So the technicians invented the heat resisting zip ties.

And the UV resisting cable ties also broke into the market. And there were Velcro zip ties, stainless steel cable ties and many special ties designed for the different applications.

Mr. Logan, was the inventor of zip ties. He was a man full of innovation.

“My father had never got any formal education. But he was the most clever person in my mind”, said Robert Loan, who is the son of Maurus C. Logan, the inventor of the zip ties. “He didn’t think it was enough and right to follow the things as the original habits. My father was always thinking of how to improve all the things he had seen. The invent of cable tie is the best case of his innovative work and life.”

In the year of 1956, Maurus paid a visit to Boeing Aircraft manufacturing factory. The laying of cables and wires in the aircraft is one of the most heavy and tedious jobs. It required the workers to fix thousands of feet cables onto the 50 feet long plywood. And the workers needed to tie knots of waxed nylon ropes. In order to knot, workers had to make the ropes twined around the fingers. So it was very easy for these workers to hurt their fingers by the waxed nylon ropes. Most of their hands were full of calluses. And some even turned into “Hamburg Hands”.

The images of these hamburg hands, came to Maurus’ mind again and again. These hands moved him so much. He decided to find out a new kind of bundling tool.

He believed there must be some easier and healthier way to finish this fixing task. These kind of health damaging and heavy jobs must not be the best ones.

In the following two years, Maurus began his tests and experiments by kinds of tools and materials. On June 24th, 1958, Maurus applied patent for his new design, zip tie.

Why did Maurus C. Logan invent zip ties? It is Logan’s kind heart. He was not willing to see the workers in the Boeing Aircraft Company suffering the hurt from the waxed nylon ropes. So he decided to invent a new tool for the workers to fix the cables and wires.

Are zip ties and cable ties the same? Zip ties are also called by the name of cable ties. They are the same thing. Zip tie is one kind of professional bundling tool. It is easy and simple to use. It can supply you  strong and secure bundling experience.